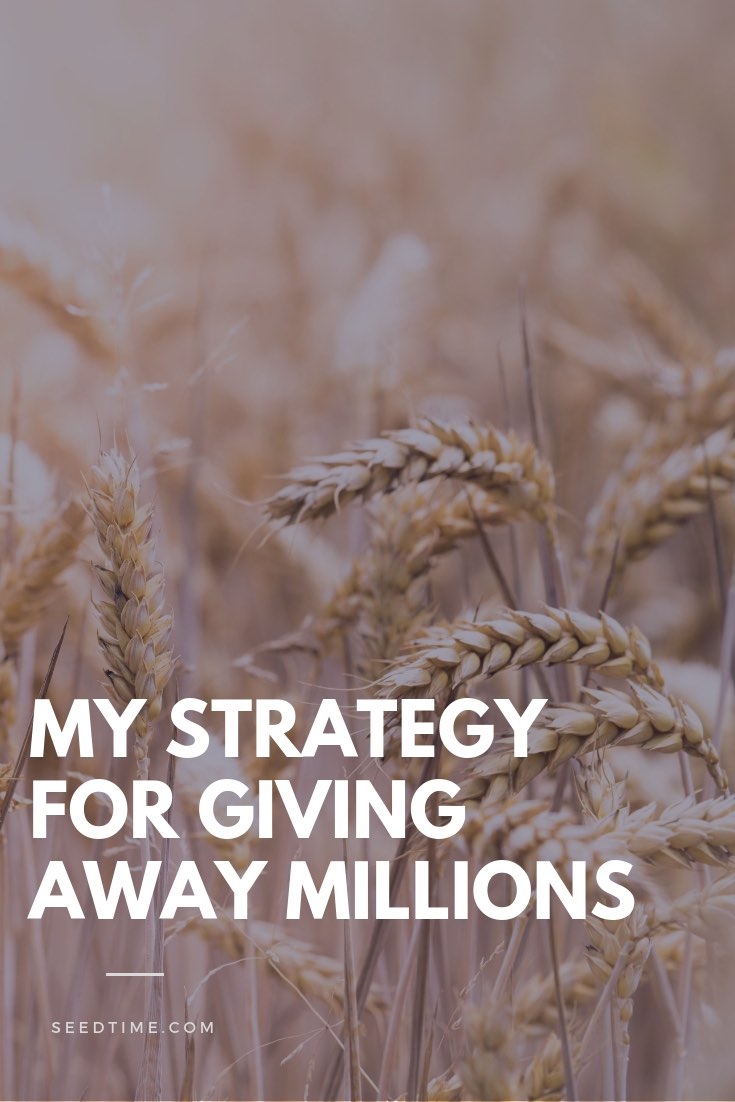 What if we could create millions of dollars only to give it away?

I believe there are lots of people who God wants to use as extravagant givers in this generation. People who will lay down their own agendas, change their pre-conceived notion of ”success,” and humbly obey what God has planned for them.

So what is it going to require?

Freedom from the love of money

I heard someone say that the reason God doesn’t give everyone a million dollars is because it would destroy them. Which is probably why 1 Tim 6:9-10 says this…

But those who want to get rich fall into temptation and a snare and many foolish and harmful desires which plunge men into ruin and destruction. For the love of money is a root of all sorts of evil, and some by longing for it have wandered away from the faith and pierced themselves with many griefs. (NASB)

Looking at the wealthiest people I know I almost always see discipline as a defining characteristic in their lives. They learn how to consistently work hard to reach a goal, whether they feel like it or not.

All discipline for the moment seems not to be joyful, but sorrowful; yet to those who have been trained by it, afterward it yields the peaceful fruit of righteousness. Hebrews 12:11 (NASB)

This book of the law shall not depart from your mouth, but you shall meditate on it day and night, so that you may be careful to do according to all that is written in it; for then you will make your way prosperous, and then you will have success. Joshua 1.8

So, as the title of the article suggests, this is my plan and outline for reaching this goal. I am sure God has different paths for each person, and as they say, there are many ways to skin a cat, and I guess the same can be said for giving away millions of dollars.

That leads us to the strategy. I realize that this will probably take a long time – I am okay with that. Sometimes God’s way takes a bit longer. This is kind of a long-term plan that I am still trying to figure out how to fulfill – but I happen to know the one who does know how.

Giving sets things in motion. As repeated as it is, it can’t be said enough: you cannot reap what you don’t sow. If you put seeds in the ground, they will eventually yield fruit (and more seeds). If you don’t sow the seeds, you don’t get the fruit or the seeds.

I don’t understand how God’s law of giving works, but I know it does work. Just like gravity – it is a law that He established that we can’t really cheat – we can just learn to work with it.

“Now this I say, he who sows sparingly will also reap sparingly, and he who sows bountifully will also reap bountifully. Each one must do just as he has purposed in his heart, not grudgingly or under compulsion, for God loves a cheerful giver. And God is able to make all grace abound to you so that always having all sufficiency in everything, you may have an abundance for every good deed. Now He who supplies seed to the sower and bread for food will supply and multiply your seed for sowing and increase the harvest of your righteousness…” 2 Cor 9:6-10

John D. Rockefeller said this about tithing… “I never would have been able to tithe the first million dollars I ever made if I had not tithed my first salary, which was $1.50 per week.”

I think God really likes it when we take the small thing that we have and do the most with it. I realize that I will never be able to give away millions of dollars unless I am continually trying to stretch my giving muscles with what I have now.

It is no secret that I don’t like being in debt. I have had moments where I could really relate to Proverbs 22:7 – “…the borrower becomes the lender’s slave.” So much of our country is willingly becoming slaves to lenders just so they can have more toys. It is far better to have fewer toys, and owe nothing to anyone.

Then after considering how much debt impairs our ability to give, it is easy to see why you should get out of debt. I mean, it is pretty difficult to get yourself to a place where you can give a lot if all your monthly income goes to paying interest to lenders.

We made some tough sacrifices to get out of debt years ago, but the fruit has been a lot of debt paid off and a lot more financial peace.

After reading quite a few books on business and entrepreneurship I became well aware that there is generally a lot more earning potential for business owners than employees. I tried the “corporate” thing and realized that wasn’t what I wanted or what God wanted for me.

About a year before I left the Rat Race (working in Corporate America) I started this website. I figured out that I could make money with it – doing something I love and helping people in the process. It was my first attempt at starting a business. Having heard horror stories from other business owners, I just assumed it would be terribly difficult and would suck all the joy out of my life. It turns out you can run a business and enjoy your life at the same time!

That doesn’t mean it is easy – just that it isn’t the nightmare of a challenge that some people make it out to be.

In terms of reaching my goal, it seems like running a business is a great avenue. As a self-employed worker, I no longer have a cap on my income. The more I put in, the more I get out. As an employee, it seemed that increasing my income often depended on the company’s success and on whether or not I was better (or played more politics) than the other 10 people up for the promotion. I am sure some people will be able to reach their goal climbing the corporate ladder, but I prefer the entrepreneurial path.

Parkinson’s Law states that expenses rise to meet income. So if you make $50k and then get a raise to $53K, you will quickly wonder where that raise went. In fact, in my case, I remember often feeling worse off financially after getting a raise, because I normally started spending when I heard about the raise and after taxes, I realized it wasn’t quite as much as I had thought.

This is the same reason you see millionaires go broke.

In principle, this should be easy, but in practice it is difficult. The key is to keep your expenses constant, regardless of how much money is coming in. But most of our country seems to think that if you get a raise, you have to immediately increase your standard of living.

Watch this video for more on how this works:

My plan to prove Parkinson wrong is to maintain my standard of living as income increases. Then (in theory) I will have an increasing amount of disposable income for the next step: paying off the house as soon as possible.

I still remember the joy of paying off our first house – it was years of hard work and commitment but we did it and it was worth every sacrifice we made to do it!

The thing about paying off your mortgage early is that just a little bit of effort can go a long way. Paying an extra $50/month on an average mortgage will allow you to pay it off 3 years early. What if you could jack that amount up to $200 or even $500 extra each month? It is exciting to think about how quick you could get it paid off.

And then, when it is all paid off, along with all the other debts, you are in a position to have a large chunk of disposable income. This, of course, will lead to an ability to give way beyond 10% to the local church, support missions, and other great ministries.

While I started investing about 15 years ago, I put most of it on hold while I was focusing on paying off my credit card debt. After all the debt was paid off I began looking for ways to invest that would help amplify the process.

While part of the investing has been in some more traditional investments like stocks and mutual funds, I plan on continuing to strategize and find ways to create businesses that help people and bring money in advance God’s Kingdom.

It starts with giving, it continues with giving, and it ends with giving. We are designed and created by God to be givers. I remember being one of those sad souls who believed that hoarding what I had would lead to the most joy. How wrong I was.

True fulfillment comes from giving, not getting. “Things” are nice, but at the end of the day, isn’t it much more valuable to be able to positively affect someone’s life?

Summing it all up

Over the last few years, I have come across quite a few Christians who have this desire to be extravagant givers – who don’t really care about keeping up with the Joneses, but who want to dedicate their earning power to God’s purposes.

Regardless of whether we have 10 talents or one, (read the parable of the talents for a refresher) how we handle what we have in front of us determines what happens next. We just have to use what God has given us and start moving in the right direction.

Hint: Getting in debt is probably not the right direction!

I remember having a cynical attitude and thinking “of course if I made a bunch of money I could give a bunch” – but that really isn’t true. God looks for people who are faithful in a small thing, that He can trust with big things. The key is to prove ourselves faithful with what we have been given so that we can do a lot more.

And just for a real-world example, I remember hearing about a woman who never made more than minimum wage who ended up leaving $3 million to a charity when she died.

While this is my plan, I know full well that challenges will come and that it will not be easy.

I also understand that being the simple guy that I am that I can’t pull it off in my own power, but I serve the same Lord who fed thousands from a few loaves and fish. God knows my heart and my desire and I am fully expecting that as I manage my talents wisely He is going to bring it to pass… for His glory.

I recently did a video about my interview with a millionaire mentor and what I learned from that – check it out below if you’re interested!