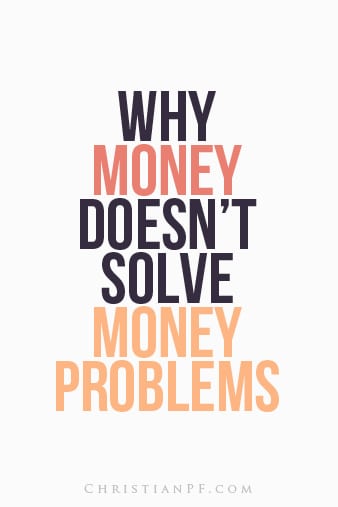 A quick caveat here:  this is written for most of us who have had lots of consumer debt, not those who find themselves with tons of debt through no fault of their own.

You can bet that the raise you are hoping to get is not going to fix your financial squeeze.

I mean even if you were making what your boss is making, it will not fix your financial squeeze.

There is a famous principle called Parkinson’s Law that essentially says that expenses rise to meet income.  So if you are having a hard time paying your bills or making a dent in your mountain of debt, more money is likely NOT your answer.

I know it may sound like this is bad news, but really this is great news.

This is because money problems (difficulty paying bills, paying off debt, getting into debt, difficulty saving) are most often caused by behavioral problems.

And behavioral problems can NOT be solved with money.

People seem to think that they can make their problems go away with more money, but really it just covers them up. This is apparent with all of the millionaires who file for bankruptcy.

They have more money than most people can dream of, yet they also have a spending problem that is far stronger than their income.

How do you fix behavioral problems?

Well, you start by asking God for help and then begin just doing one small thing at a time. It is a lot easier to update your house by working on one room at a time than by tearing up every room all at once.

You can start by learning to not spend more than you make.

There are practical things that can be done to help out, but I think nothing will be more valuable than just taking a long hard look at where your money is going and asking yourself, “do I really need this?”.

We say we NEED all this stuff to survive and yet 100 years ago most of it didn’t even exist (see Richer than Rockefeller for more).

I think when we are honest with ourselves, we can see that a lot of our NEEDS are really just screaming, yelling, panicky WANTS.

“6 But godliness with contentment is great gain. 7 For we brought nothing into the world, and we can take nothing out of it.  8 But if we have food and clothing, we will be content with that.”

I have a long way to go as I try to fight off my panicky wants daily, but that is what I am aiming for.

Update 1-4-18: We have gotten a few upset comments from folks who have loads of medical debt or other non-consumer debt and I just want to be clear that is a different animal than what we are talking about in this article.  This is directed towards most of us who struggle with controlling our temptation for more and more leading to loads of debt.